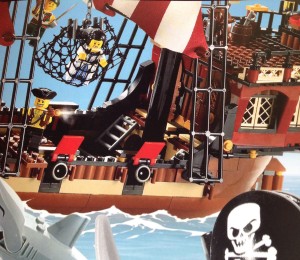 My niece and nephew last week participated in their nursery’s Pirates and Princesses day. Cue extremely cute picture of both of them together in their costumes. Ahhhhh! And can you guess who was the pirate and who was the princess? Of course you can…boy pirate and girl princess.

I’m not having a go at my sister for her choice of outfits, I imagine most of us would do the same, conforming wins! And I would not want to be the mother that forces her little boy (yearning to be the BEST pirate ever) into a princess dress to make a point. I have a little boy who LOVES cars, diggers and bulldozers, and probably, although I haven’t yet tested the theory, pirates! I’m well aware that a lot of toddler girls would LOVE to dress up as a princess. I don’t have a problem with that…I do recognise that there are differences between the sexes. It’s the lazy gender positioning of this dressing up day in ones so young that really bothers me.

My niece and nephew are 20 months and 3 years respectively.and I can’t help but feel that this dressing up day is another unnecessary little brick on their TALL tower of social expectation.  They are SO young; they are sponges ready to soak up society’s teachings. And what does this teach them? Girl = princess. Boy = pirate. It’s an extension of the gender filing we do from birth girl = pink, boy = blue / girl = dolls, boy = cars.

It’s also really divisive. Perhaps they didn’t notice being so young, but it will enter their consciousness at some point. I wonder if pirates and princesses played together that day? I know that my niece’s princess dress really hampered her climbing skills so she couldn’t get on the same slide that her brother, in his streamlined pirate gear, was throwing himself down.

True the 1 year old could have refused to put the princess outfit on and insisted on being a pirate (and actually she put up a pretty good fight about it apparently – she does love climbing!) but she’s 1. An articulate and reasonable argument about identity is not on her radar.

And nor should it be. Wouldn’t it be nice to bring up our children in a world where they could be what they want to be before, during and after they’ve even realised what that is! There is no denying that progress in equality has been made and maybe being part of a traditional sporting world where progress is slow means I’m sensitive to this sort of thing. But I still feel we are bringing our children up in a world governed by gender stereotypes. A princess and pirates day is a seemingly small but nonetheless powerful reminder of this.

So my conclusion to this one…Why not have a pirates day one month and a royalty day another? Show our children that we can be different to each other without being divisive.  Empower our children to make their own decisions about identity. Show them a world of opportunities. Give them the freedom to grow up in a society where expectations are not piled on them just because they are a boy or a girl.

18 thoughts on “Pirates and Princesses”

I'm Lucy, very much a mother and very much more than a mother, struggling to work out how to fill in the 'occupation' part of forms. I teeter on the funny side (mostly amusing myself)...less lifestyle and more life-thoughts; welcome to my website.
Follow @puddlemother
Follow on WordPress.com